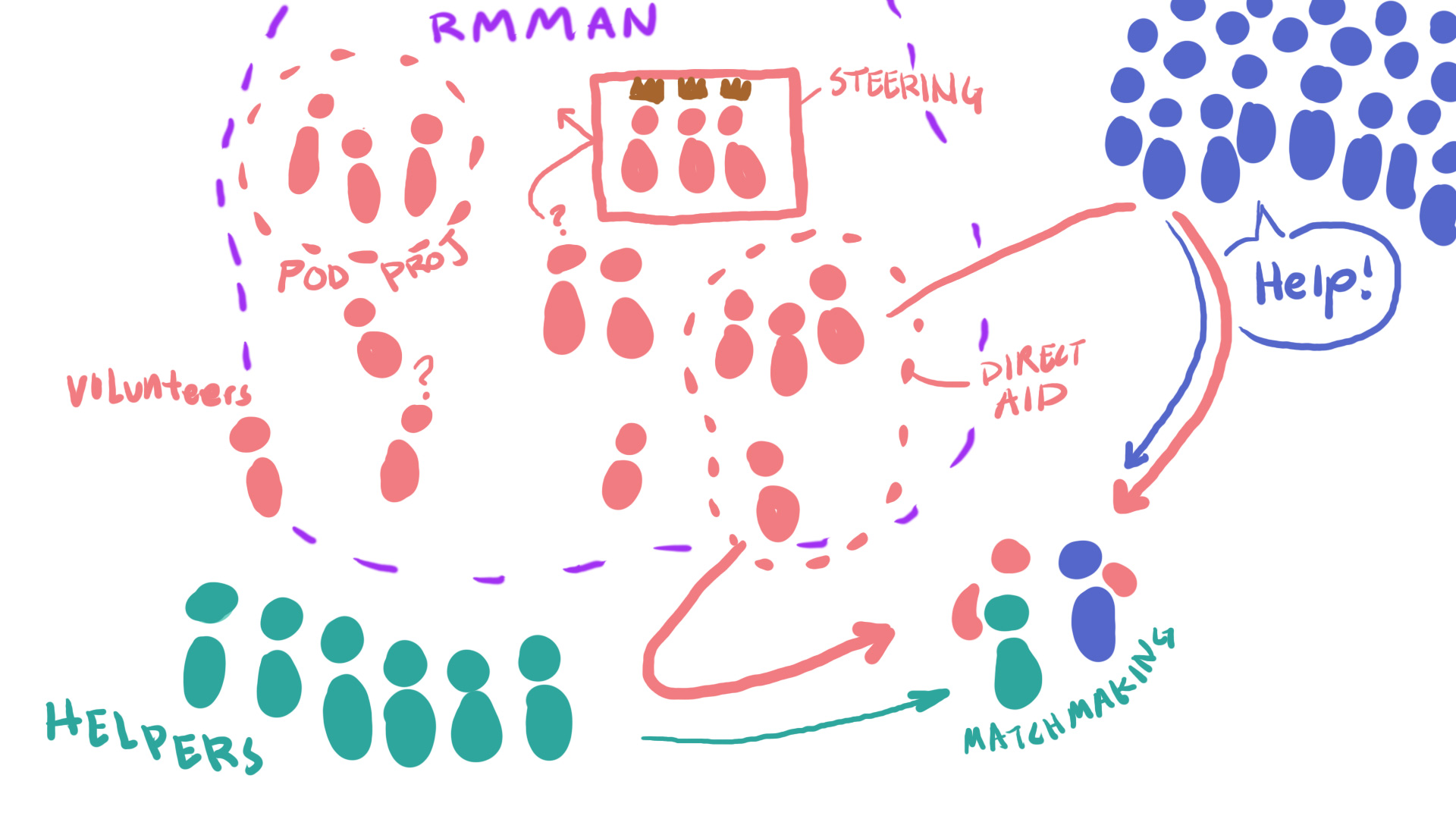 With MEDLab at CU Boulder

All groups have structures. Be it a Facebook group, a nation-state, or a community garden there is a structure. Often times this structure is obfuscated through complicated bureaucratic systems outlined in complicated bylaws or legalese. Other times the structures are implicit or shaped by the platforms which contain a group.

My objective here is to figure out how to create a universal visual language that the team at MEDlab can use to help groups and their members better understand these structures, make them explicit, and thus more accessible. 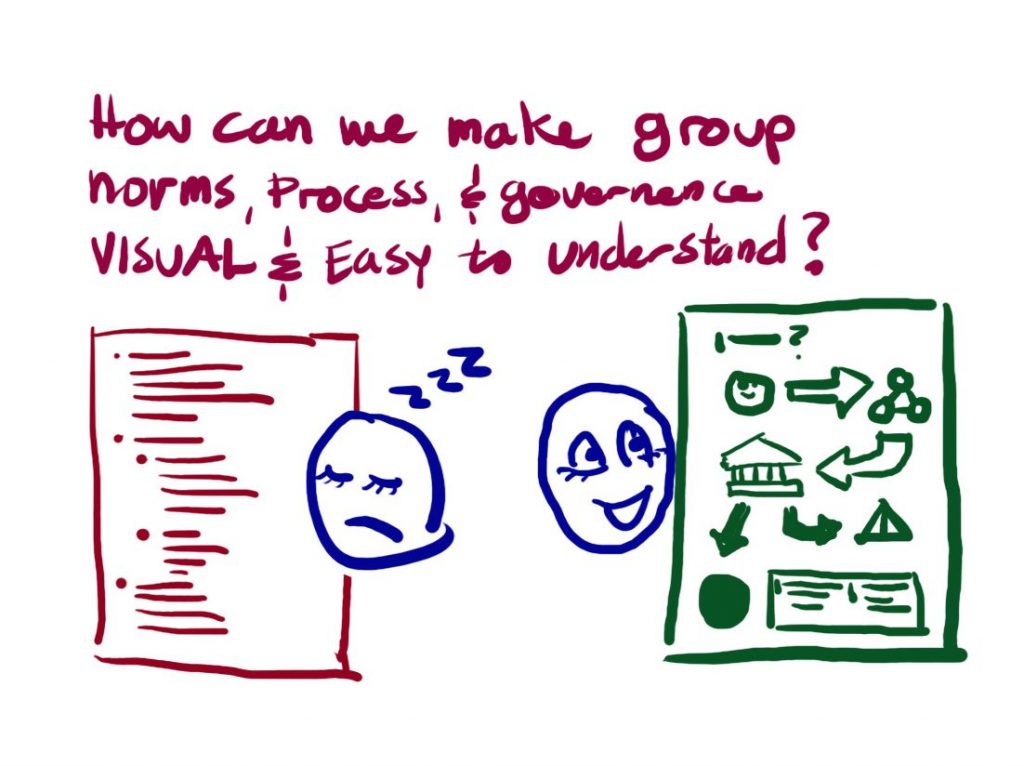 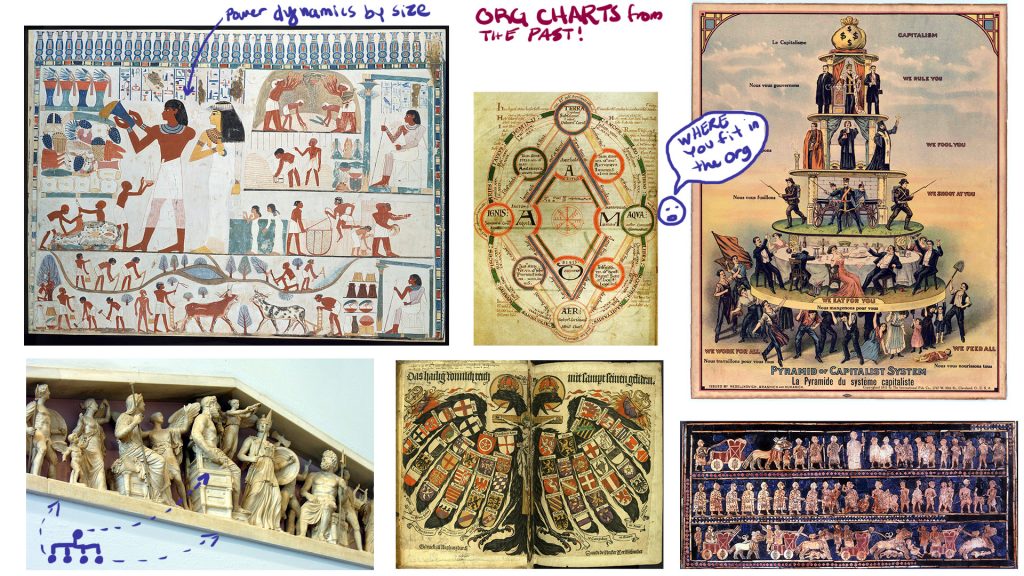 I took a look at some historical organizational charts first. These were often created by the elites of a group to indicate how things worked. The Egyptian example (top left) uses size to indicate who is important and pictograms that should a process. The pyramid at the top right was created, I assume, by the working class for the working class to create class consciousness or indicate where people stand in the organization of the economic/political system of the time. 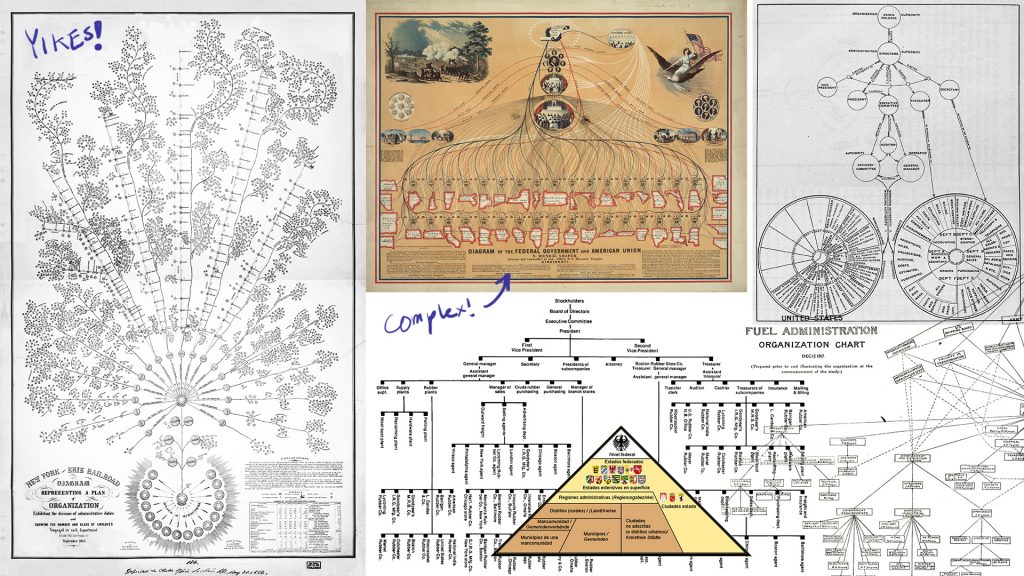 Next, I looked at more contemporary organizational charts. These are actually quite useful when an organization has a clear military-style hierarchy. The commander (CEO or constitution in the USA’s case) is at the top and all authority flows down from there.

I noticed the complexity of the USA’s organizational flow. Perhaps this complexity is meant to make organizations more opaque and harder to engage with? 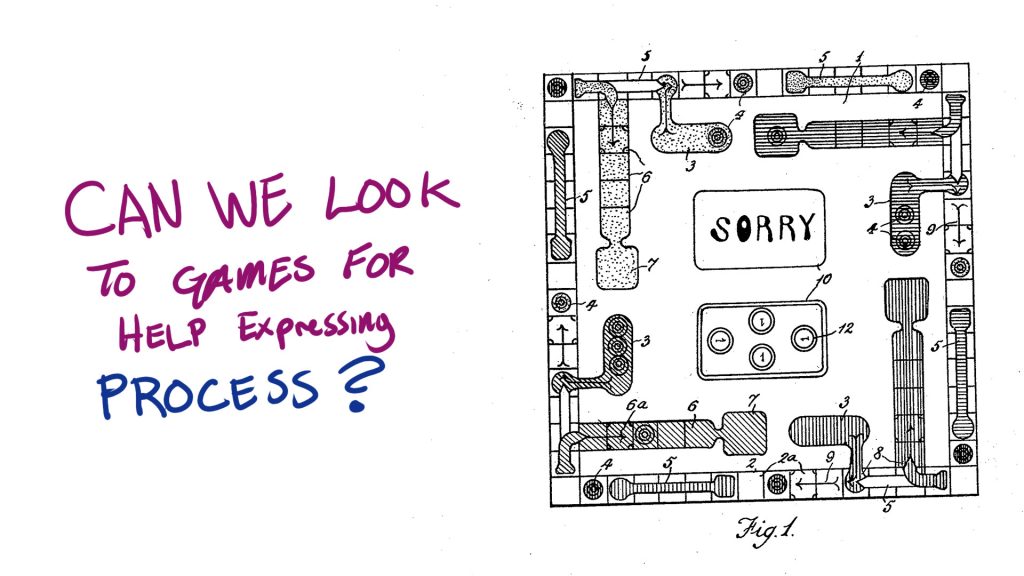 Tabletop and video games, I believe, offer great inspiration for visual process and instruction. Game design needs to explain how to play and visually remind players of rules as they participate. I focused on cross and circle games and video game skill trees.

Cross and circle games and roll and move games take players through a process to a destination. In an organization, people move through processes (such as being hired, onboarded, and removed). The forking nature of The Game of Life offers great inspiration for when a group member comes to a decision point. I could imagine a group having a visual board with icons that represent where each member of the group is in any given process. 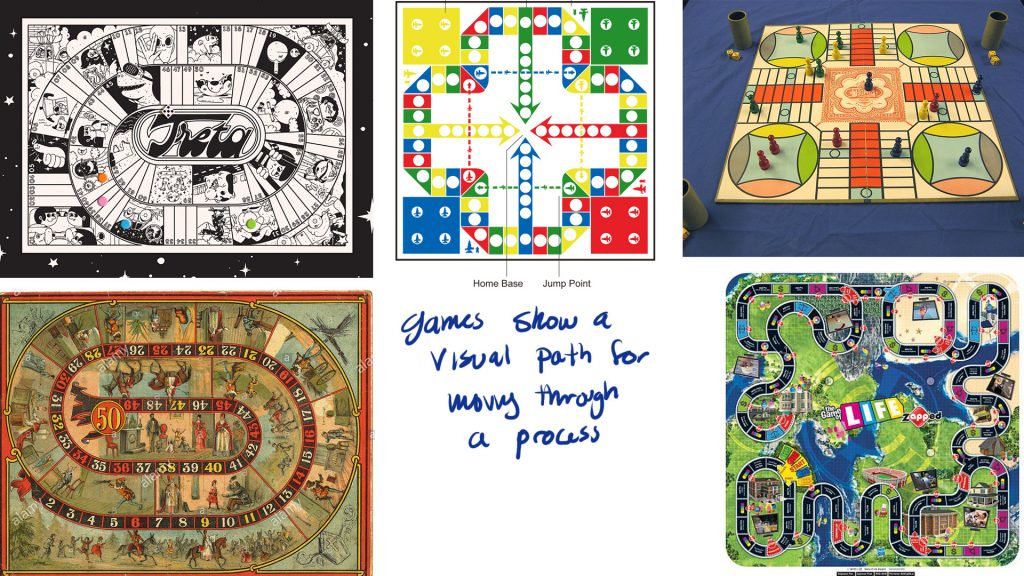 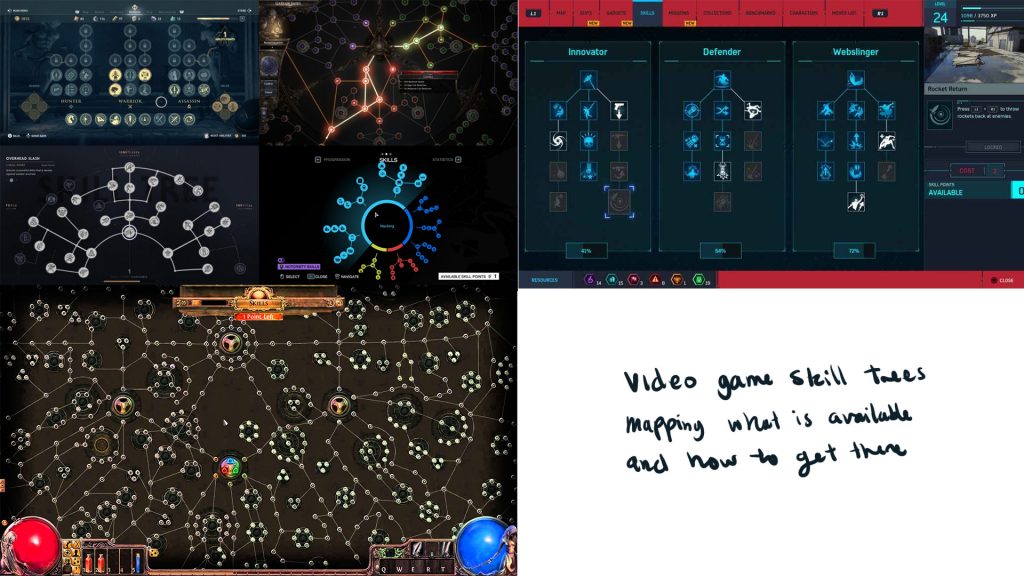 With video game skill trees a player is given a visual map of all possible skills that can be attained. Most skills require other skills further down the tree to be unlocked before they will become available.

In groups, there are certain rights and responsibilities that are available to people based on other rights. For instance, a Facebook group might require someone to attend a training before they are given the power to moderate comments.

The instructions for how to play games can also offer wonderful inspiration. Games can be very complex yet their instructions are often only a few pages and easy to read and understand. Now compare these instructions to a modern Terms of Service or Bylaw document… 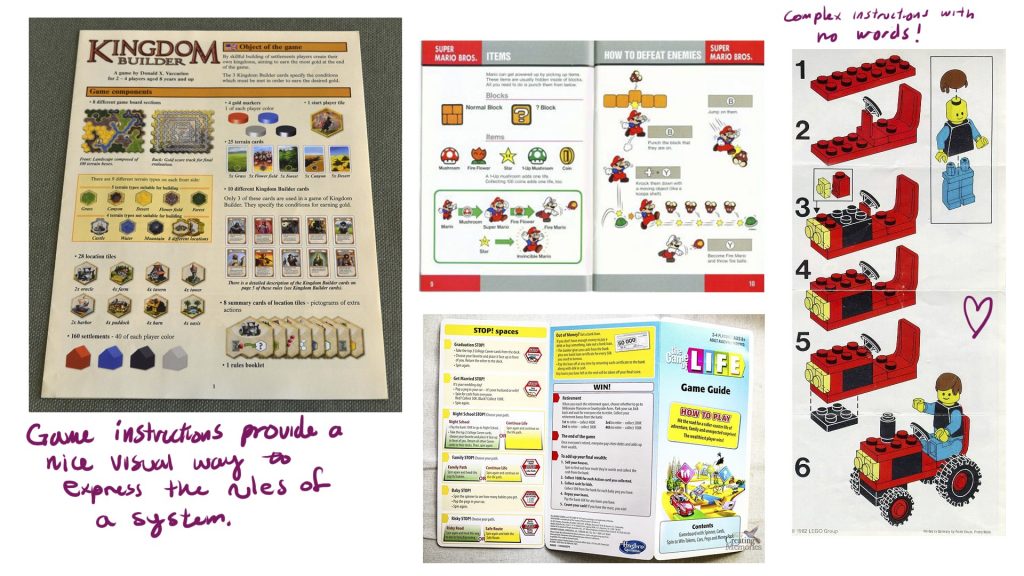 The Rocky Mountain Mutual Aid Network (RMMAN) is a great example of a group that MEDlab is seeking to support with their tools and processes.

Born from the need generated by COVID19 RMMAN sprung up in spring 2020 under the banner of another mutual aid Facebook group. Like many mutual aid groups, it ran quite well without any formal structure for several months. It is now in a place where it needs more structure. I am currently working with the group to create a clear organizational structure, putting to use the very tools I wish to develop with MEDlab. 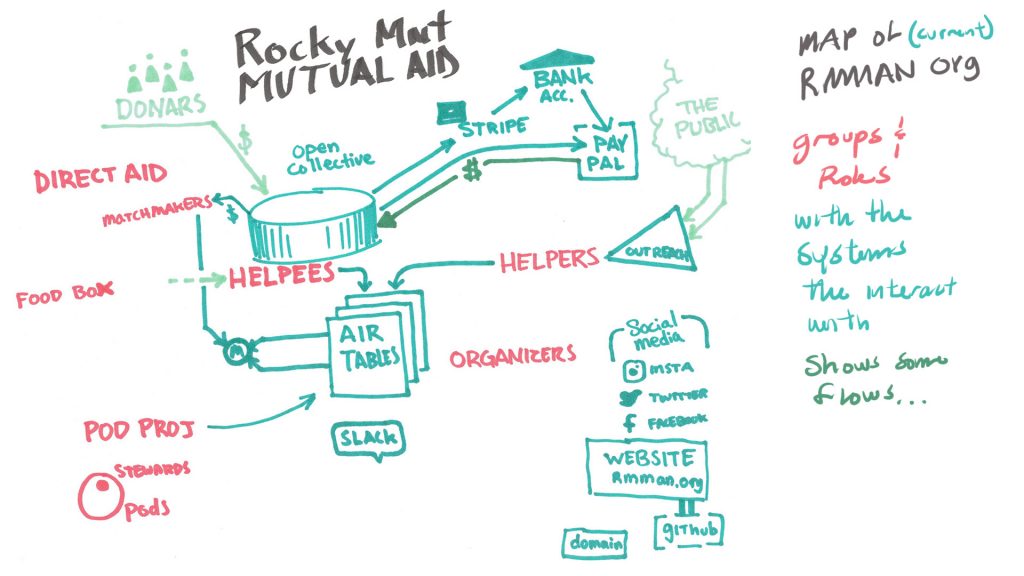 This illustration describes the groups and roles within RMMAN as well as the domains (platforms, tools, etc).

People can participate with RMMAN as donors, helpers, helpees, or organizers. Organizers tend to group into the Direct Aid “project”, the Pod Project, or other supporting projects such as tech or social media. 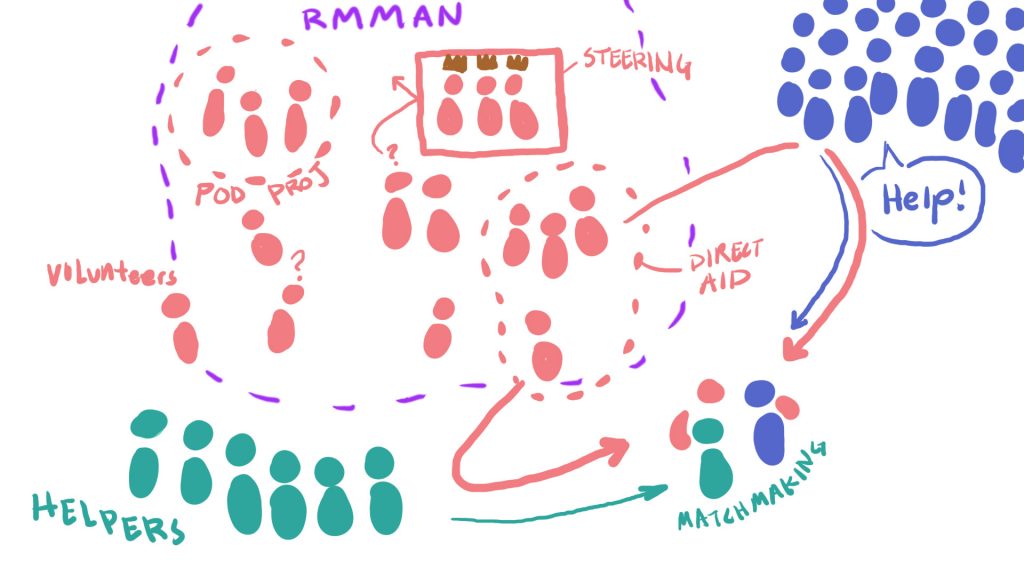 Another way to illustrate the current structure of the group is to use blobs and grouping of people. Here we see people requesting aid (helpees) in blue, people offering passive aid (helpers) in green, and organizers in red. These volunteer organizers are within RMMAN (the purple line) and some are within projects.

I’ve drawn a solid line around the “steering committee” which consists of a few people (myself included) who currently hold a lot of power without having a clear method of brining new people into that power. 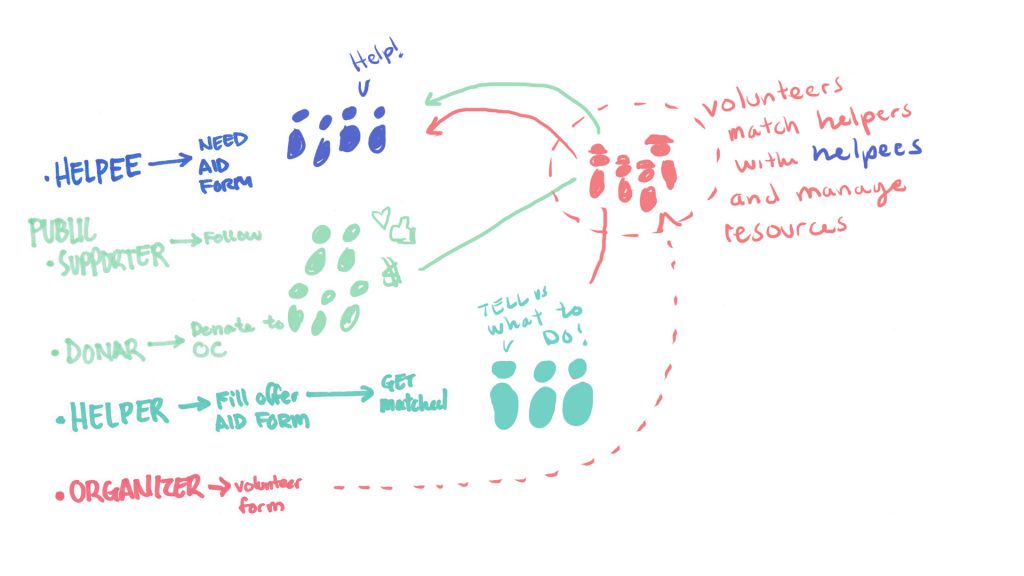 Another method for showing the structure of RMMAN is to draw out the flow one takes to become a certain role.

We can see here that helpers must go through the volunteer matchmakers to be connected with helpees. 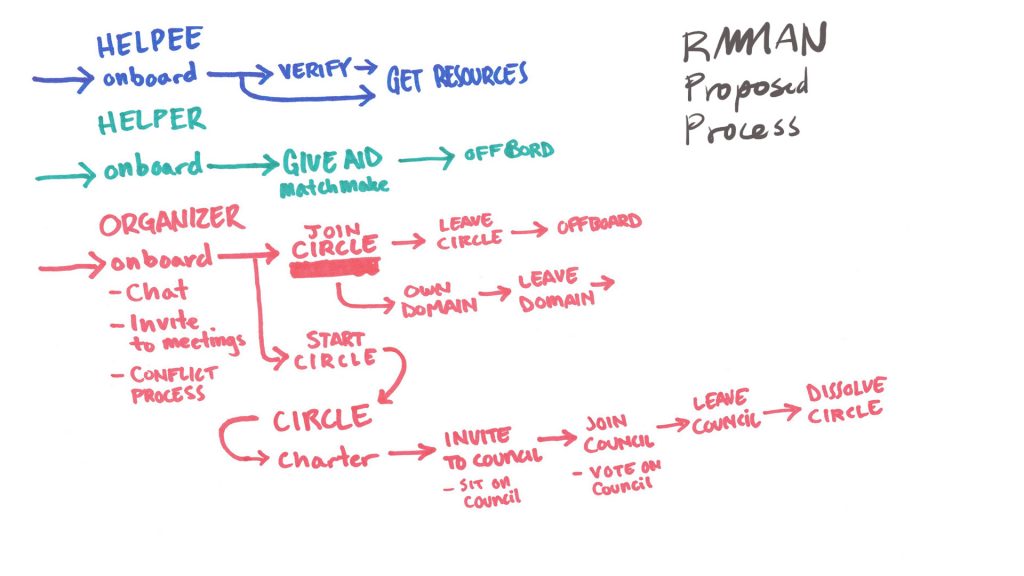 Through discussion with stakeholders (albeit fewer than is probably good practice), I and a few others have started drafting a structure for RMMAN. We are basing it off of Community Rule’s Circle template.

(CommunityRule is a tool being developed by MEDLab, which will probably incorporate the visual design I’m working on here!)

So the projects like Direct Aid would become “circles”. The diagram above shows the flow people go through to hold different roles. Under Organizer onboarding step you can see some rights listed out. 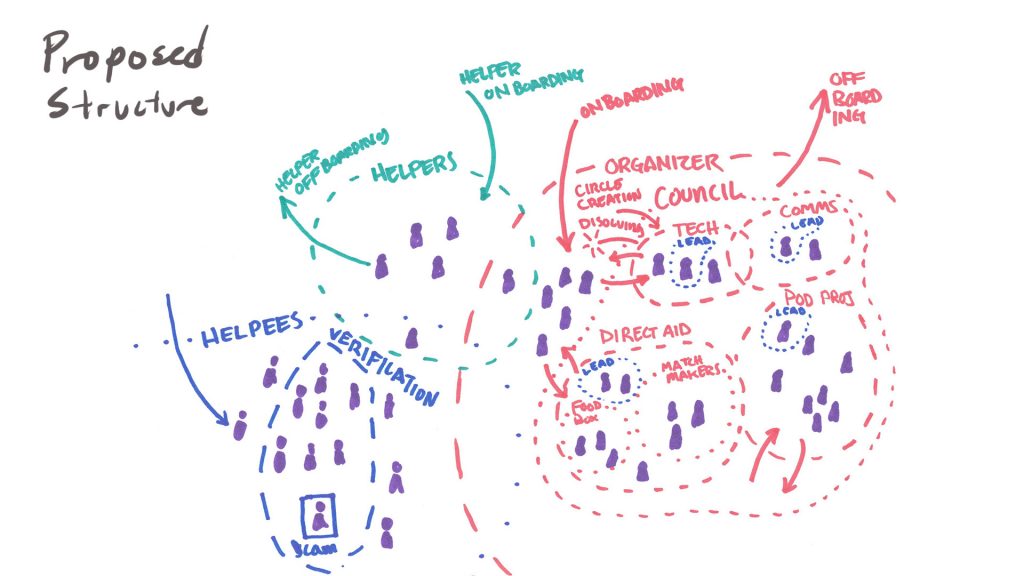 The flows from above describe how people move across the membranes of the different groups within the RMMAN.

Notice the nested nature of Circles (Tech, Comms, Direct Aid, Pod Project) within the Council which is within the Organizer’s blob. There is a mixed metaphor here. These blobs represent the roles people have but within them are structural entities.

The focus of this illustration is to show the onboarding and offboarding process for roles within RMMAN.

A Note on Cellular Biomimicry

I’ve found that when I start to draw organizations I’ll often end up with something that looks like a cell. I think the main cause of this biomimicry is due to cell membranes. These semi-porous natural structures allow in things the cell needs while letting out things that the cell doesn’t need.

Most organizational structures are like this. We want our groups to let in most people while keeping out those who might cause harm. A group without this membrane or boundary can hardly be called a group at all, for how would you know the inside from the outside. 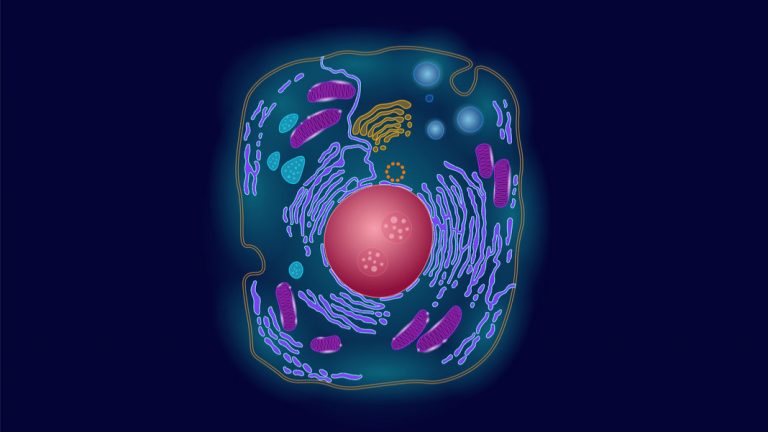 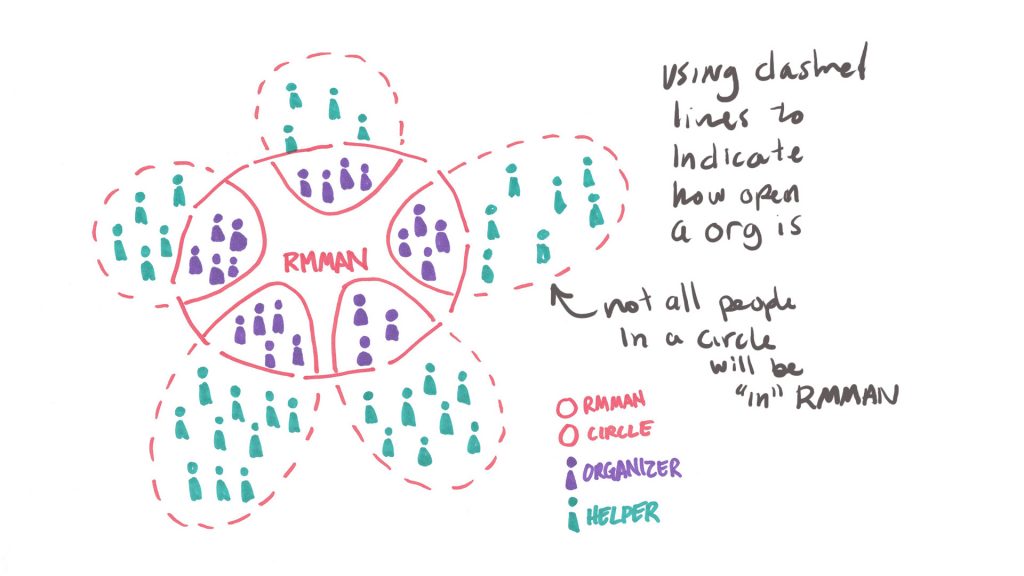 In this illustration, I am focusing on how Circles interact with RMMAN. If Circles are to be autonomous then it stands to reason that some people might work within a circle but not be part of RMMAN as an Organizer.

Where an Organizer is someone who has pasted through a threshold (or membrane or onboarding process) and is understood to be “in” RMMAN.

We might actually draw another circle around the whole lot of people above. With the inner circle representing the nucleus of the RMMAN organization.

The difference between a Helper and an Organizer might be a different set of rights and responsibilities. 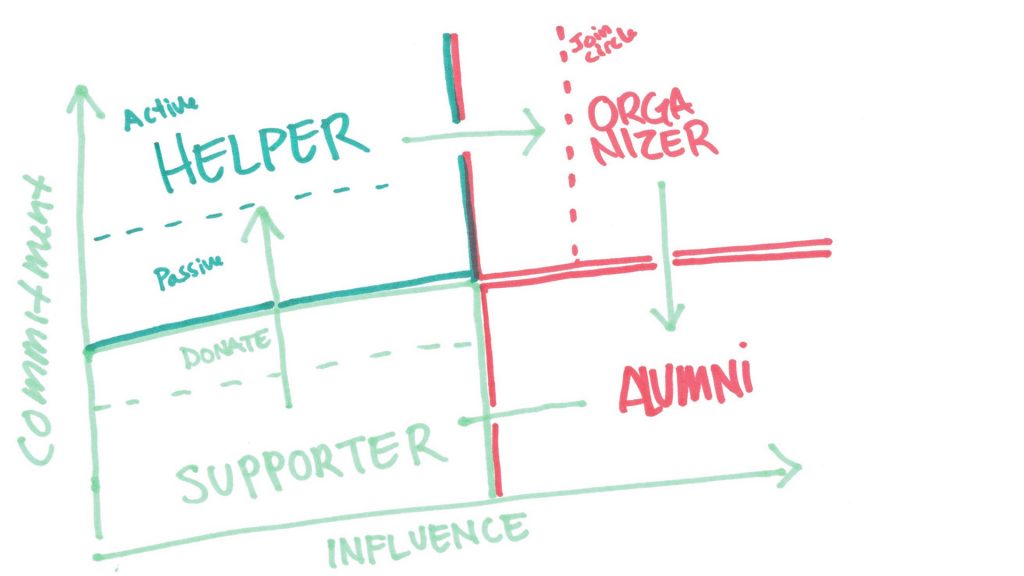 The difference rights and responsibilities that people within RMMAN hold can be expressed as a graph. One’s commitment to the organization is represented by the Y-axis (up and down) with their influence (or power to make change in the organization) growing as we move right across the X-axis.

Here we see a low commitment and low influence position is a supporter. A supporter’s commitment grows through donating money. At some point a supporter might sign up to offer aid and become a passive helper, or someone waiting around for an Organizer to match them with someone who needs help.

An active helper is someone who might volunteer to do more active work within RMMAN but not go through the onboarding process to become an Organizer. Their commitment is greater but their influence is limited.

Alumni are people who were Organizers but have stepped away, thus limiting their commitment but still retaining incluence.

We can combine some of these illustrations into an org chart that describes the type of people, their rights and responsibilities, and the power hierarchy.

Here we see the council at the top which represents circles, which are composed of organizers, who are distinct from helpers, and drawn from public supporters. 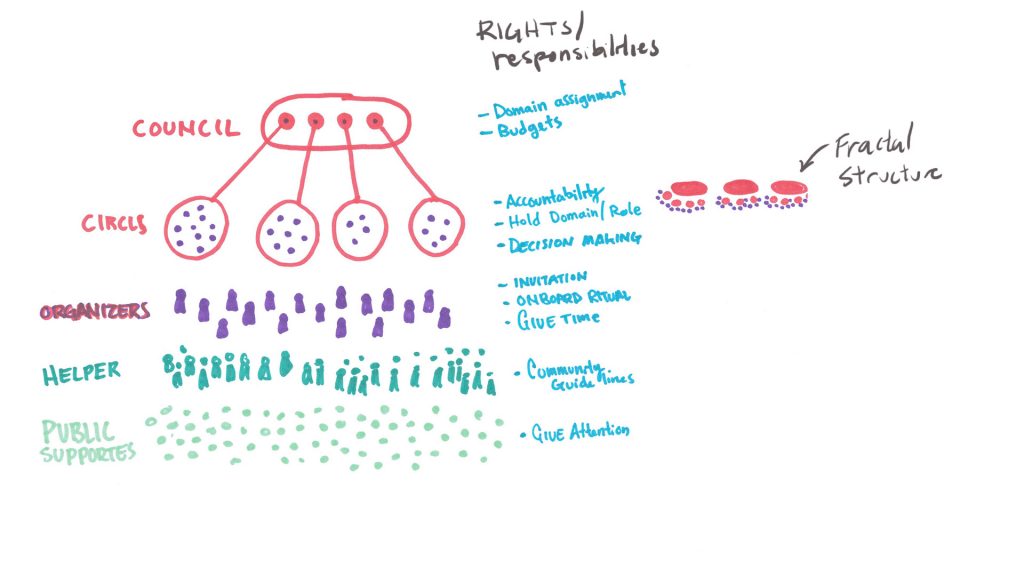